By the Unwanted Witness

Uganda has experienced decades of civil strives especially as a result of power struggling during regime change. This greatly jeopardized the security of the country and individuals. For almost thirty years now since the overthrow of the Obote government by the National Resistance Army in 1986, the country has not had nationwide insecurity but rather witnessing power retention techniques by the regime.
For along time, physical threats have been employed to silence critics of the regime but with advanced technology and embracing of online platforms, energies are now being redirected to these platforms.

Recent investigative report compiled by Privacy International (PI) titled for God and my president, the National Resistance Movement regime is investing huge sums of taxpayer’s money into illegal spying on citizens with the sole purpose of keeping the regime in power.  However, the government has been on defensive since Friday the 16th of October 2015 including threatening to drag the BBC to court over the said report. The Unwanted Witness looks critically on why the Uganda government cannot survive without secret surveillance against its citizens;

Government fears its citizens: Spontaneous mobilisation is highly feared by the regime, which justifies why the citizens can no longer access some public places like the constitutional square. It is such spaces where the Arabs in Egypt and Tunisia among others gathered to democratically demand for their governments to leave power after failing on service delivery. So, if a regime can act out of fear and deny citizens physical space there’s no way the Ugandan government would not invest in spying technologies?

The 2009 Buganda demonstration, which was regarded as “people’s power” was one of the most powerful and successful protests by citizens which gave the regime hard time to crush until the intervention of His Majesty the King of Buganda who called his subjects off the streets, this caused more fear to government. Now, soon after that, there was a hard to crash demonstration of citizens and political activists with similar approaches (spontaneous mobilization by the citizens) the “Walk to Work” protesting the skyrocketing commodity prices and demanding for a government’s intervention. 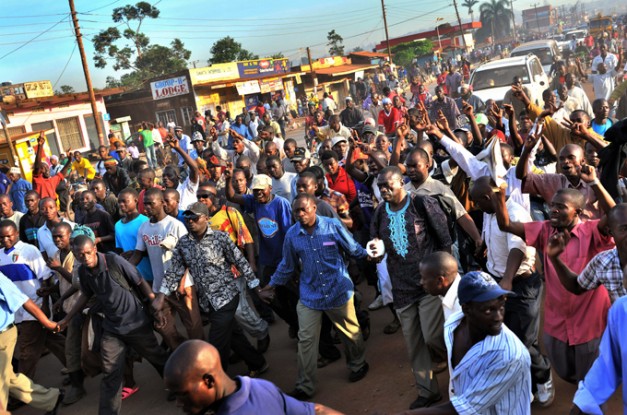 Ugandans during the 2012 walk to work protests. photo by Google

The capacity of the regime was overstretched as citizens were walking from all corners to the capital, Kampala. Interestingly, the number of those walking was doubling everyday whenever there was a group of people walking to work. It was hard for police to disperse these activists from walking to work as the entire world was watching. It was rather up to the regime to find solutions to stop these demonstrations i.e. bribe some of the activists who would attend these planning meetings and leak secrets to police/government or procure spyware technologies to secretly listen to conversations of activists while in these meetings. These would be deployed in public places’ wifi’s, cars, on activists’ computers and mobile phones among others. 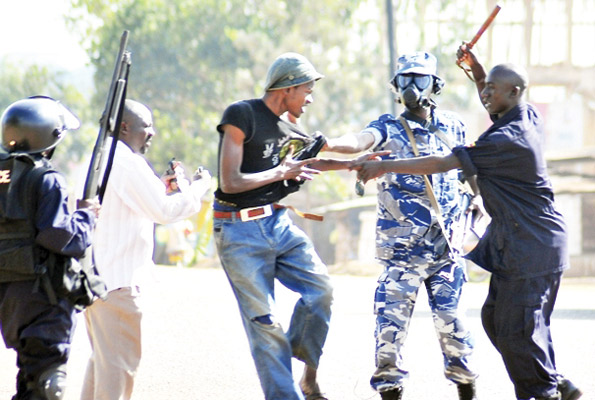 When you read about the Privacy International report and find such quotes “With our implants and imbeds, we have been able to get hordes of information revealing secret plans, especially of FDC even before they can act upon them,” reads part of the president’s brief.  There’s a clear link to the use of spywares against activists or citizens.

Public Administration taking the lion’s share on the national budget; The country’s service delivery is deteriorating as most funds are spent on administration and also widespread corruption seen as one of the weaknesses of the regime but used to facilitate its stay in power. The Government’s use of confidential classified expenditure budgets has increased significantly. The classified expenditure allocation under the ministry of Defence budget doubled from UGX 122 billion (US$ 48.9 million) in the 2012-2013 fiscal year to UGX 300 billion (US$ 115.38 million) in 2013-2014.

When citizens witness the unabated corruption and gross human rights violations being committed with impunity, some will become hopeless and start living on the edge while others will be working hard to ending the regime’s tenure. In such scenarios, a regime would use money and surveillance to disorganise the active group while the other group will be given handouts as a sign of sympathy with their worrying conditions.

How the actual journey that embraced the secret spying started:

SIM Card registration; In 2011 all private telecom companies embarked on mandatory SIM card registration countrywide on behalf of government. This exercise generated a lot of personal bio data in the custody of private entities. Utilising the existing cyber laws government easily obtains this data to spy on citizens.

For instance, section 11 of the Regulations of Interception of communications Act mandates that interception capabilities of telecommunication services are under obligation to hand over collected data to government among others. This law gives almost unfettered discretion for state officials to conduct surveillance, without the need to obtain judicial authorisation. The powers of surveillance are broad, including interception of phones calls, emails or other communications as well as monitoring of meetings.

Since the SIM Card registration exercise, all personal information collected has remained in hands of private entities with unlimited access by anyone. And also, the failure by the government to have enacted a law on Privacy and Data protection leaves everyone wondering why it has taken this long.

Besides laws, partnerships have also been formed between institutions. On January 8 2015, the Uganda Police Chief Gen Kale Kaihura signed a Memorandum of Understanding with Uganda Communications Commission (UCC) represented by the Executive Director Godfrey Mutabaazi. The MoU would enable police obtain information about Internet users who are critical to the establishment and content published so as to enforce cyber laws.

Digitalisation of Parliament; The legislative arm of government has of late turned digital phasing out the use of papers among legislators. Each Member of Parliament was given iPads, which is connected onto the system. While the general public viewed the iPad project as a wastage of tax payers’ resources, the master minders had an operation to accomplish, “operation Fungua Macho”

“Due to leakages from within the state apparatus, activity-spyware and gadgets targeting specific people have been deployed in the following institutions, CMI, ISO, ESO Uganda Police and Parliament,” president Museveni’s brief on operation Fungua Macho states.

All indicators reflect to government’s determination to suppress citizens’ enjoyment of freedoms of expression online. However, it is crucial that those institutions, activists, the media and politicians continue advocating for these spaces as well as embracing secure online communications.