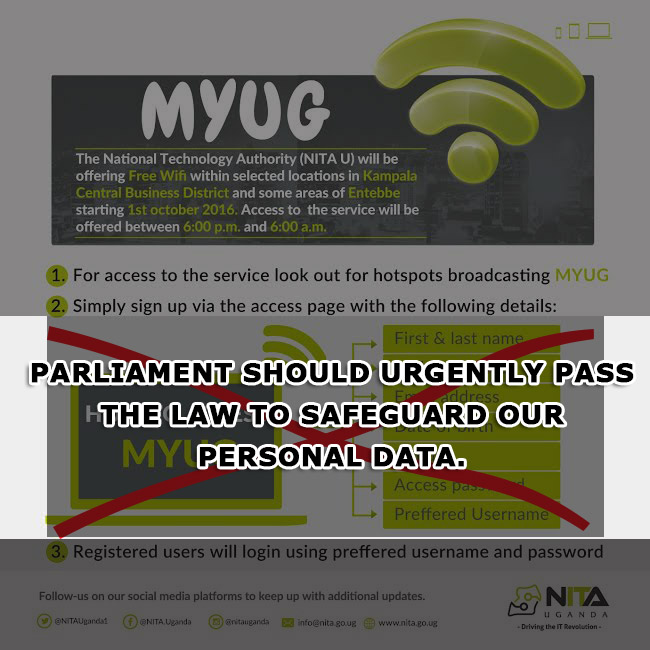 Parliament should urgently pass the Privacy and Data Protection Bill, 2015 to protect citizens’ personal information being targeted by both security apparatus and regulatory bodies

Kampala 3rd/ October/2016; the Unwanted Witness-Uganda is concerned about the trend in Uganda targeting citizens’ data to compromise their privacy.

On September 30, the government through the Ministry of Information Technology and Communication (ICT) launched the first ever free internet for Kampala and Entebbe.

The launched internet under the code name #MYUG is being managed by National Information and Technology Authority-Uganda (NITA-U), which by law is mandated to retain metadata (details of communication users for both voice and data)

The newly launched MYUG internet, requires one to fill in a form which technically picks personal information including; the name, mobile phone number, date of birth, gender, email address, among others before accessing the service.

On September 22nd, the Unwanted Witness-Uganda issued a statement expressing concerns that this public Wi-fi could be a trap targeting government critics

Barely one week, the government of Uganda through Uganda Police has plans of installing SPY cameras in all urban areas and on highways which would cost Shs 3bn, according to the local press. 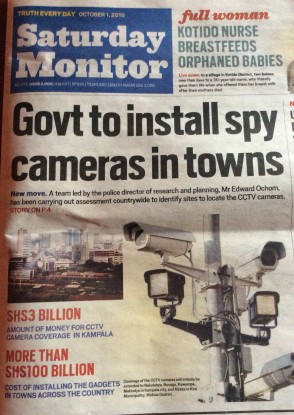 The Unwanted Witness-Uganda is worried about the current trend that exhibits big appetite for collecting personal information of citizens and secretly spying on the activities of citizens without being guided by the legal framework.

“We believe that the government bears a responsibility to maintain security of the country, but it must come with transparency and accountability on protecting people’s right to privacy,” Jeff Wokulira Ssebaggala, the Chief Executive Officer, the Unwanted Witness-Uganda, said.

He said that a “genuine internet” should only require a “password or a pass code” for one to connect as opposed to the rigorous process to access MYUG.

The Unwanted Witness feels that citizens should be part of the process to secure the country and therefore see reasons for installing SPY cameras by security agencies or providing much personal information with no hidden intentions to connect to MYUG free internet.

i)  Parliament should urgently pass the much awaited Privacy and Data Protection Bill,2015 into law to protect the citizens’ personal data and privacy

iv)   Police should publicly share the guidelines on SPY cameras to control misuse or harassment of government critics.