Kampala, 22nd /September/2016; the Unwanted Witness welcomes the first ever-free Internet in Uganda however, concerned about the narrowing civic space both offline and online.

Early this month, the government through the National Information Technology Authority-Uganda (NITA-U), announced that free Wi-Fi would be offered in Kampala and Entebbe come 1st October 2016.

A Fungua Macho report released by Privacy International in 2015 indicated that the government of Uganda from 2013 procured Finfisher spyware from Gamma International to scout on its opponents including journalists, human rights activists and members of the opposition political parties.

Following the procurement, FinFisher access points were installed on the Wi-Fi networks and/or business centers of 21 mostly high-end hotels in Kampala, Entebbe and Masaka and after installation, it can be disguised as a PDF, a word processing document or another file. It also can be disguised as a fake website which, when visited by the target, will download FinFisher onto the target’s device. 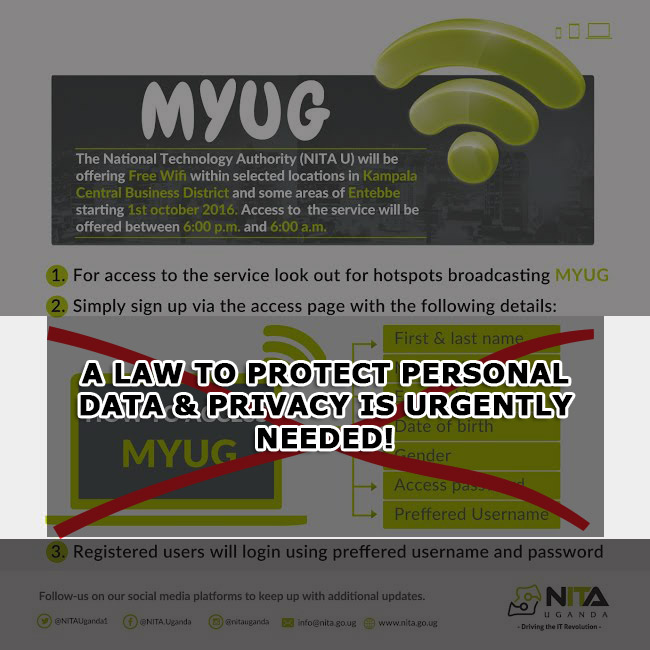 With a data protection and privacy law, User data will be in safe hands

The Unwanted Witness is very suspicious of government’s hidden agenda in providing free Internet to a well off population in terms of wealth and Internet connectivity compared to other places (rural) facing several challenges including poverty hindering their access to Internet in the country.

“Uganda has over 7 million Internet users daily with majority of users dwelling in Kampala and Entebbe. This project is a total wastage of public resources and will not address the country’s digital divide problem, between urban and rural poor” Jeff Wokulira Ssebaggala, Chief Executive Officer Unwanted Witness said.

He said Ugandans should be careful while connecting to the public Wi-Fi, as it could be a trap to intercept their communications and collect data of recipients, which can be used against them.

The Unwanted Witness would like to provide Tips to remain safe online….

When you’re on a public network, you’ll want to turn things like file sharing, images, videos, documents off, as anyone can access them—they don’t even need to be a hacker,

Most Operating Systems come with at least a basic firewall nowadays, and it’s a simple step to keeping unwanted local users from poking at your computer. You may already be using a firewall, but just in case, go into your security settings (in Windows under Control Panel > System and Security > Windows Firewall; and on a Mac under System Preferences > Security & Privacy > Firewall) and make sure your firewall is turned on. You can also edit which applications are allowed access by clicking on “allow a program or feature” in Windows and “advanced” in OS X. Your firewall is not an end-all, be-all protector, but it’s always a good idea to make sure it’s turned on.

Regular web site connections over HTTP exchange lots of plain text over the wireless network you’re connected to, and someone with the right skills and bad intent can sniff out that traffic very easily. It’s not that big of a deal when the text is some search terms you entered at Life hacker, but it is a big deal when it’s the password to your email account. Using HTTPS (for visiting web sites) or enabling Secure Socket Layer (when using applications that access the internet, such as an email client) encrypts the data passed back and forth between your computer and that web server and keep it away from prying eyes.

If you want to guarantee your security and you’re not actively using the internet, simply turn off your Wi-Fi. This is extremely easy in both Windows and OS X. Again, this isn’t all that useful if you need the internet, but when you’re not actively using it, it’s not a bad idea to just turn it off for the time being. The longer you stay connected, the longer people have to notice you’re there and start snooping around.

Unfortunately, not all sites offer SSL encryption. Other search engines and email providers may still be vulnerable to people watching your activity, so if you use one of these sites frequently (or really just want the extra protection), you may want to try using a VPN, or virtual private network. These services let you route all your activity through a separate secure, private network, thus giving you the security of a private network even though you’re on a public one.

We therefore call upon Uganda government to consider relocating this project to other regions that might be struggling with access to the Internet if the motive is to increase Internet access.