UPDATED
Kampala 29TH January 2016, Uganda Police Force under the Special Investigations Unit (SIU) in Kireka has temporarily stopped online activist Charles Rwomushana from reporting on bond but he will be called upon being needed. 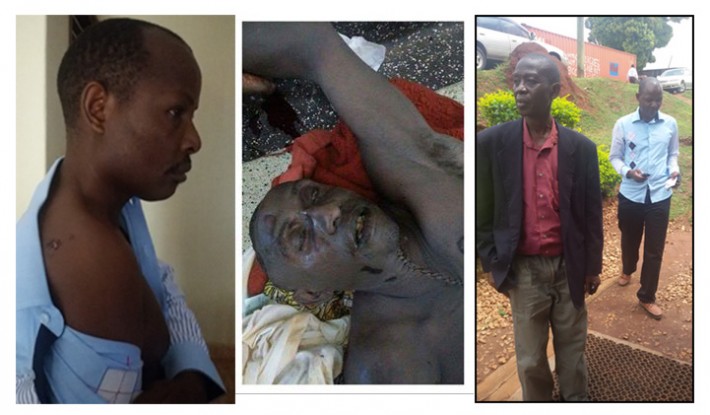 L-R: Charles Rwomushana shows off his scars obtained at the time of his kidnap, the controversial corpse photo of Christopher Aine published by Charles Rwomushana and on the right with his lawyer Yunus Kasirivu while at SIU in Kireka

Rwomushana had so far reported on police bond four (4) times on a weekly basis since he’s released from police detention on 12th January 2016 after being charged with libel and promoting sectarianism. He’s being accused of publishing a corpse photo allegedly of Christopher Aine, an aide of presidential candidate Amama Mbabazi who up to now still missing. Aine’s family allege that he picked from his home in Kyanja, a Kampala suburb by people in police uniform.

The Unwanted Witness which is defending Rwomushana welcomes police’s decision but calls upon police to drop those preferred charges as they are baseless and cannot be proved for online publication. 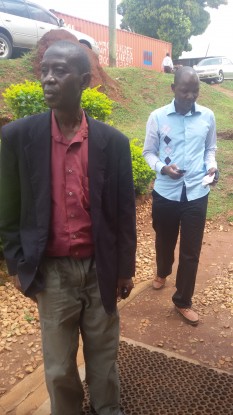 Rwomushana (back) and his lawyer Yunus kasirivu while at SIU kireka

Rwomushana who was released from SIU Kireka on 12th January 2016, has today protested his bond extension saying police is simply buying time and keeping him from engaging in meaningful activities.

Rwomushana was released by police two weeks ago after being charged with libel and promoting sectarianism following his facebook post of corpse allegedly of Christopher Aine, an aide of presidential candidate Amama Mbabazi.

Rwomushana is expected to report for the forth time at SIU on 29th January 2016.

Kampala 18th January 2016, An online activist, Charles Rwomushana is threatening to boycott his bond appearance at police if the police continues to delay his production in court. Rwomushana who today appeared at the Special Investigations Unit in Kireka for the second time was disgusted after learning that the officer in charge of his bond was absent and the bond extended to Friday 22nd Jan 2016.

“This is the second time that my client is appearing for his bond without being attended to by the Police. This practice is unacceptable and we will be forced to boycott if police is paying games,” Rwomushana’s lawyer Yunusu Kasirvu threatened.

Rwomushana was arrested on 8th Jan 2016 for allegedly posting a corpse photo on Facebook for Christopher Aina, an aide to presidential candidate Amama Mbabazi. He was released on Monday 11th Jan 2016 after being charged with Libel and promoting Sectarianism.

Kampala 15th January 2016, Police has today morning extended the bond of Charles Rwomushana to Monday next week on 18th/01/2016. The police made the communication to Rwomushana as he reported to the Special Investigation Unit (SIU) of the Uganda Police Force.

Rwomushana was on Monday 11th/01/2016 released from incommunicado where he had spent three days. He had earlier this month been kidnapped by six plain clothed men for allegedly posting a corpse photo on Facebook of presidential candidate Amama Mbabazi’s aide Christopher Aina.

He was charged with libel and promoting sectarianism. After his release, Rwomushana was again placed under house arrest at his Kyanja resident, a Kampala suburb.

Kampala 12th January 2016, The Special Investigation Unit (SIU) of Uganda Police Force last night released online activist Charles Rwomushana on police bond but placed him under house arrest for an unspecified period of time. Rwomushana had been reported missing since Friday the 08th/01/2016 after six plain clothed men kidnapped him. 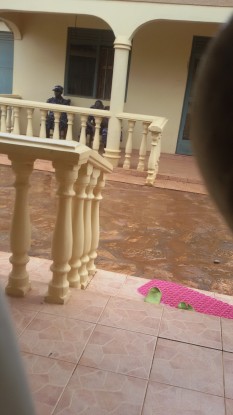 Charles Rwomushana was kidnapped after he allegedly posted a corpse photo on Facebook of presidential candidate Amama Mbabazi aide Christopher Aine. Aine has been missing for four weeks although his family claims that men in police uniforms picked him from his home in Kyanja, a Kampala suburb.

The Unwanted Witness in the company with lawyer Yusuf Kasirivu visited the SIU offices in Kireka, Kampala where they found Rwomushana’s records in the counter book but was not in the detention facility. Rwomushana last night at 8:30PM was transferred to his home and put under house arrest. 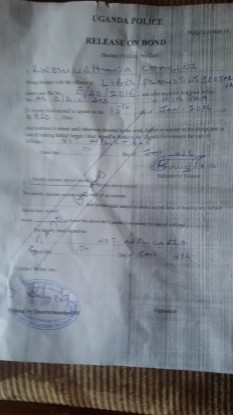 Police bond given to Charles rwomushana

The police bond seen by the Unwanted Witness indicates that Rwomushana was charged with libel and promoting sectarianism. He is required to report back on 15th/01/2016 for further investigations.

The Unwanted Witness wishes to denounce the tyrannical actions of security agencies. The continued arrest, disappearance and intimidation of online activists which seeks to stifle the enjoyment of Internet freedoms in Uganda and it’s everyone’s duty to defend their enjoyment.

Kampala 9th January 2015. Police have arrested an activist Charles Rwomushana over a corpse photo on Facebook that allegedly belongs to Christopher Aine who was an aide to presidential candidate Amama Mbabazi. Aine has been missing for three weeks and his family claims that he (Aine) was picked late December 2015 from his home in Kyanja, a Kampala Suburb by people in police uniforms.

The arrest of Rwomushana came after when police arrested, interrogated and released on police bond two editors of the Red Pepper, which had also published the same photo in their paper.

Rwomushana, who’s being accused of distributing the photo by police has been detained in unknown detention since Saturday 9th, January.

His lawyers, relatives and friends who had gone to Special Investigation Unit based in Kireka, a Kampala suburb have been denied access to him.

The Unwanted Witness is however still following the matter and will be sharing further reports on the same.