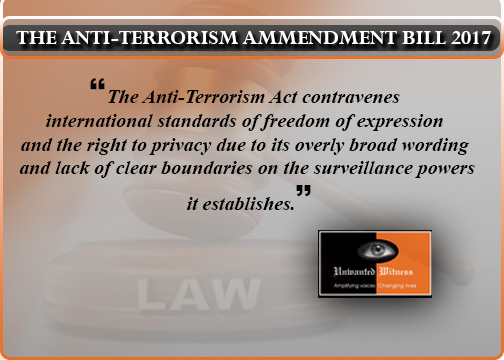 Kampala, 3rd /February/2017; Barely in less than two years, Ugandan government is seeking to amend the Anti-terrorism act, 2015. The Anti Terrorism Act, 2015 is ranked by the Unwanted Witness as one of the most repressive on the land, which is being enforced without judicial oversight.

The 2015 amendments were passed with a lot of fear from civil society organisations and activists as it gave excessive powers to government especially the security apparatus to freeze bank accounts of an NGO on “suspicion” of having links with a terrorist group and also, sets death as a punishment for bloggers or journalists perceived to be aiding or abetting terrorism.

During the parliament’s plenary session presided over by deputy speaker Jacob Oulanyah on Thursday the 2nd February 2017, Internal Affairs state minister, Kania Obiga introduced the Anti-terrorism amendment bill, 2017 for its first reading before being referred to the house’s line committee for consideration.