Enemies of the Internet 2014: entities at the heart of censorship and surveillance

Home Enemies of the Internet 2014: entities at the heart of censorship and surveillance 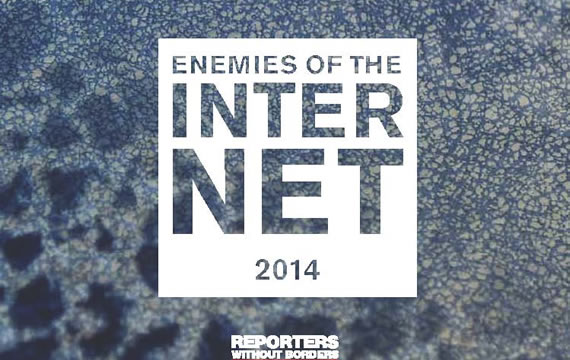 This year’s “Enemies of the Internet” report, which Reporters Without Borders publishes every year on World Day Against Cyber-Censorship (12 March), spotlights the government units and agencies that implement online censorship and surveillance.

These entities, which include Pakistan’s Telecommunication Authority, North Korea’s Central Scientiﬁc and Technological Information Agency, Vietnam’s Ministry of Information and Communications and China’s State Internet Information Office, have used defence of national security as grounds for going far beyond their original mission in order to spy on and censor journalists, bloggers and other information providers.

Three of the entities that Reporters Without Borders has named as Enemies of the Internet are located in democracies that have traditionally claimed to defend freedom of expression and the free flow of information. The NSA in the United States, GCHQ in the United Kingdom and the Centre for Development of Telematics in India are no better than their Chinese, Russian, Iranian or Bahraini counterparts.

Online information could not be spied on and controlled without the help of private-sector companies. In last year’s Enemies of the Internet report, Reporters Without Borders spotlighted the Internet mercenaries, the companies that place their expertise in the service of authoritarian regimes in return for sums of money that are often colossal.

This year, Reporters Without Borders is also turning the spotlight on the “surveillance dealerships,” the trade fairs and forums that bring companies specializing in Internet surveillance and censorship with officials from authoritarian regimes. ISS World, Milipol and Technology against Crime are among the most notorious.

After these appalling practices have been exposed, action is needed to stop them. To this end, Reporters Without Borders has prepared a series of recommendations for governments and international bodies that are designed to help curtail the paranoid security excesses of recent years.

Attention must be drawn to the practices of these Enemies of the Internet, which usually operate in the shadows. As many people as possible must be made aware of them. This is needed so that international bodies, the United Nations, Europe and the treaties regulating the export of surveillance technology focus on these practices and adopt legislation to end them as quickly as possible. Reporters Without Borders invites Internet users throughout the world to join this initiative.

The Internet is a collective resource. Don’t let “Enemies of the Internet” turn it into a weapon in the service of special interests.