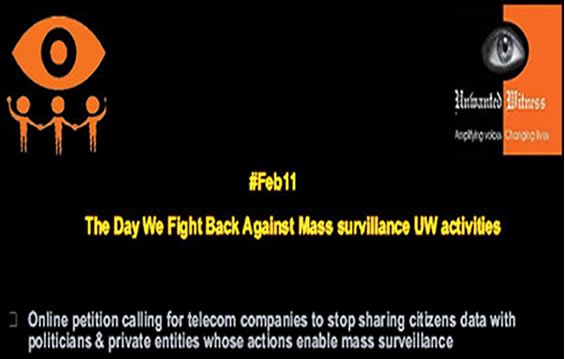 Citizens call: UCC to prevail over misuse of personal information by telecom companies on the day we fight back.

Kampala, February, 11 2014 unwanted witness is joining the rest of the world to commemorate the day we fight back against mass surveillance and intrusion to privacy.

While The right to privacy is a basic fundamental right and freedom guaranteed by the 1995 Uganda constitution under Article 27 as inherent and not state given, recent actions by telecommunication companies, state security agencies, business enterprises and politician point to an orchestrated move grossly abusing the said right through misusing customers telephone information under the watchful eye of the Uganda communication commission.

The said Telecom companies have continuously misused consumers information gathered in their custody by passing it over to third parties. Notwithstanding the existence of policy directives that guarantee consumers rights as stipulated by UCC this abusive action has persisted especially due to the absence of a privacy and data protection law in Uganda.

Unwanted Witness has been running an online petition where it has collected signatures of telecommunication customers. This petition is aimed at bringing to the notice of UCC about the continued misuse of consumers information by telecom companies that was collected during the SIM Card registration process.  See: (Link to the UW Petition to UCC)

Unwanted Witness notes that while telecom companies are business oriented entities who are supposed to adhere to the guidelines issued by the regulatory authority it (UCC) has not enforced the implementation of the consumer’s rights by telecommunications service providers.

As we commemorate February 11th the day to fight back, Unwanted Witness wishes to inform the public that the online petition against misuse of consumer’s information by Telecommunication companies has received overwhelming support from those who have fallen victims of this negligent act.

“The said testimonies of both internet and mobile phone users point to the existence of mass surveillance on citizens which is an infringement of personal privacy and breach of fundamental right to privacy. This has been facilitated by the absence of a privacy and data protection law in Uganda.” Said Godfrey Twesigye Head of Program Unwanted Witness.