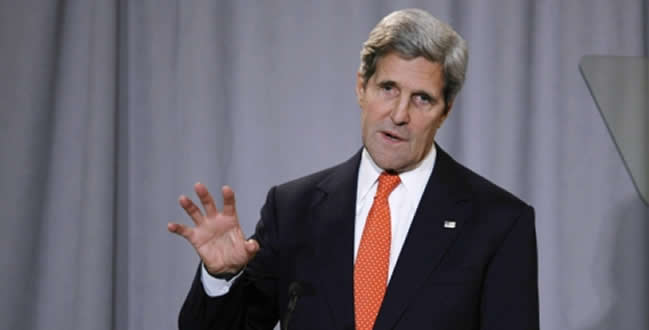 US Secretary of State John Kerry said for the first time on Thursday that, in some cases, US spying has gone too far, amid a continuing row with other nations over the matter.

“I assure you, innocent people are not being abused in this process, but there’s an effort to try to gather information,” Kerry told a London conference via video link. “And yes, in some cases, it has reached too far inappropriately”.

“And the president, our president, is determined to try to clarify and make clear for people, and is now doing a thorough review in order that nobody will have the sense of abuse,” he said.

“And in some cases, I acknowledge to you, as has the president, that some of these actions have reached too far, and we are going to make sure that does not happen in the future.”

Recent allegations and reports of widespread spying by the National Security Agency have sparked a major rift in trans-Atlantic ties.

Just last week, German Chancellor Angela Merkel angrily confronted US President Barack Obama with allegations that the NSA was snooping on her phone, saying it would amount to a “breach of trust”.

A German intelligence delegation and a separate group of EU lawmakers were in the US capital on Wednesday to confront their American allies about the alleged bugging.

Kerry’s remarks – released in a State Department transcript – came in response to a question addressed to both him and British Foreign Secretary William Hague about government surveillance.

“We have actually prevented airplanes from going down, buildings from being blown-up, and people from being assassinated because we’ve been able to learn ahead of time of the plans.”
US Secretary of State John Kerry

The top US diplomat spent a good portion of his answer justifying the collection of data as necessary due to the threat of terrorism.

“Many, many, many parts of the world have been subject to these terrorist attacks,” he said.

“And in response to them, the United States and others came together – others, I emphasise to you – and realised that we’re dealing in a new world where people are willing to blow themselves up.”

He added: “We have actually prevented airplanes from going down, buildings from being blown-up, and people from being assassinated because we’ve been able to learn ahead of time of the plans.”

Kerry’s comments came as the US Senate Intelligence Committee approved legislation on Thursday that would tighten controls on the government’s sweeping electronic eavesdropping programmes but allow them to continue.

In a classified hearing, the committee panel voted 11-4 for a measure that puts new limits on what intelligence agencies can do with bulk communications records and imposes a five-year limit on how long they can be retained.

“The NSA call-records programme is legal and subject to extensive congressional and judicial oversight, and I believe it contributes to our national security. But more can and should be done to increase transparency and build public support for privacy protections in place,” Senator Dianne Feinstein, chairwoman of the committee, said in a statement.

If approved by the full Senate and the House and signed by the president, the act would require the special court that oversees the collection programmes to designate outside officials to provide independent perspective and assist in reviewing matters that present novel or significant interpretations of the law.

It also requires Senate confirmation of the NSA director and inspector general.

However, the bill ran into immediate opposition from technology companies, civil-liberties groups and another chairman in the majority Democratic Senate.

Democratic Senator Patrick Leahy and Republican Representative James Sensenbrenner this week introduced a bill to end what they termed the government’s “dragnet collection” of information.

Sensenbrenner and Leahy, the chairman of the Senate Judiciary Committee which also oversees the Foreign Intelligence Surveillance Act, were the primary authors of the USA Patriot Act implemented after the September 11, 2001, which gave law enforcement and intelligence agencies much more authority.

Democratic Senator Ron Wyden, one of the four intelligence committee members voting against their panel’s legislation, said it would codify surveillance practices that are too broad.

“More and more Americans are saying that they refuse to give up their constitutionally-guaranteed liberties for the appearance of security; the intelligence committee has passed a bill that ignores this message,” Wyden said in a statement.

A critical role in the debate may be played by Google, Facebook, Apple and other big technology companies, which have been stunned by intelligence agency collection of their data and the concerns of users, especially those overseas with little protection from US spying.

On Thursday, those three companies, joined by Microsoft, Yahoo and AOL, wrote to Leahy and other members of Congress to “applaud” the contributions of his bill.

They repeated earlier calls that they be allowed to disclose the scope of their co-operation, adding that “our companies believe that government surveillance practices should also be reformed to include substantial enhancements to privacy protections and appropriate oversight and accountability mechanisms.”

The technology companies’ anger mounted after a report in Wednesday’s Washington Post that said the NSA had intercepted massive internal transfers of Google and Yahoo data overseas.

In an unusually long response to that report and others this week, the NSA said it must collect information of foreign intelligence value “irrespective of the provider that carries them”.

It said it follows “minimization” procedures approved by the attorney general to avoid disseminating data on US residents.

“In addition, NSA is very motivated and actively works to remove as much extraneous data as early in the process possible – to include data of innocent foreign citizens,” the agency’s public affairs office wrote.