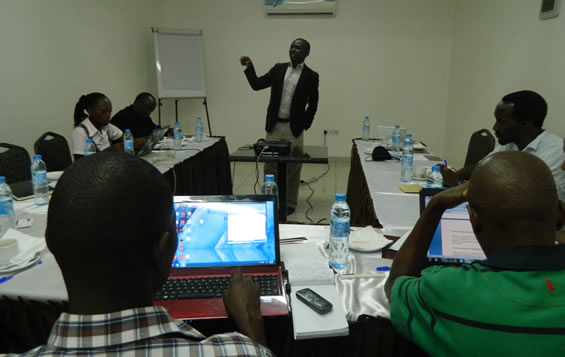 With the communication avenue in Uganda shifting from analog to digital, Unwanted Witness-Uganda, a human rights organization specialized in amplifying voices and changing lives through usage of media tools, has launched a campaign to train all the Human rights advocates, especially the bloggers, Social media activists and Journalists on how to go about threats from a number of attackers, particularly government security agencies.

Speaking to the advocates who turned up for a one day workshop organized by Unwanted Witness Uganda at Piato Restaurant in Kampala, the organization’s Chief Executive Officer Geoffrey Wokulira Ssebaggala said that all advocates who use online to execute their duties are not safe at all as they are being tracked down and their information accessed by ill-intentioned people.

“When you look at the environment under which we are operating in, we are in danger” Said Ssebaggala.

He decried the stringent legal framework, which capacitates telecommunication companies in Uganda to surrender everyone’s information without his/her consent and without obtaining a court order which he says, is illegal and an infringement on human rights.

“When you look at the legal framework, we are indeed in danger, for example the computer misuse act, and others, the online users are completely vulnerable” Ssebaggala said, adding that “Today, telecommunication companies can even surrender my data to whoever likes it without following any process yet in other countries people have got to go to Court”

He thus said that there is a need for human rights advocates, to push for legislation whose major role would be to protect the populace’ data.

“Government should introduce a law on data protection which will be in position to protect my [Human rights advocate] data through making clear guidelines on how one can access my information that is in the hands of telecommunication companies” Ssebaggala who said that has information that government has set up a social media centre to effectively monitor social media usage, said.

He also used this workshop, to pronounce the organization’s intention to start carrying out massive campaign that would revolutionarize the   online environment for all its users as he said that

“Today marks the beginning of our struggle to demand for our rights of operating under a free environment while online” said Ssebaggala.

In Uganda, government tap Mobile phones on justification that it is controlling security an act which the human rights claim is a violation of the right to enjoyment of privacy given that everyone will be in position to listen to peoples’ conversation every single minute.

Besides the official tapping by government, people’s websites, email addresses, social media accounts such as Face book, twitter, Skype and mobile phones are being hacked into by unknown cyber dealers which put their sensitive information at risk of being used anyhow, by ill-intentioned people.