Uganda‘s Netizens are being threatened

Home Uganda‘s Netizens are being threatened 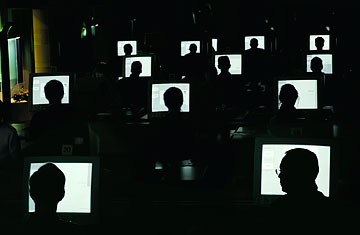 Kampala, 21st/03/2016; Uganda’s Netizen are receiving direct threats from people who seem to be organized over critical posts on the Internet.  Netizen are being threatened with arrests, threats to disappear and hacking into accounts among others.

Lately, the Unwanted Witness has documented an increase of fake accounts duplicated from existing genuine individual accounts, being used by unknown people making friend requests to the same people who happen to be friends already.

Some victims who spoke to the Unwanted Witness said that there seem to be a unit within the security apparatus established to cause mayhem to Netizen. They say this group was put in place to watch over activities on the Internet soon after the elections.

Dickens not the real name says, whenever he publishes a post, which criticizes the regime, he receives texts via his inbox from someone asking to delete the post and failure, he would be arrested and be made to disappear for forever.

Another “John”, not real name says, he has never taken his attackers serious because online harassment has become an order of the day. I have been threatened even before the elections and there have been several attempts to hack into my account. The previous one was where someone used a blackberry gadget to get into my account but the attempt was not successful.

The Internet shutdown on February 18th 2016 is causing a very big shift on online activities in Uganda.