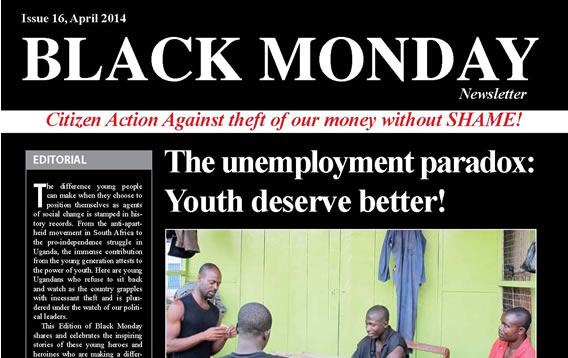 The high level of unemployment among the youth is a global concern as it is a
recipe for organized crime, lawlessness,politically instability and social conflicts. The
Government of Uganda has in the past undertaken a number of programs intended to
address the problem of un-employment and poverty among the youth including: Northern
Uganda Social Action Plan (NUSAF 2), Skilling Uganda, Youth Enterprise scheme,
Youth Venture Capital Fund, and the latest one being the youth livelihoods programme.
It is important to note that around 78% percent of Uganda’s population is under the age
of 30 years. In this edition, we meet a Ugandan youth as he narrates his story of growing
up, and the challenges other youth in his age group faced Growing up in my home district of Bugiri, my friends and I would sit by the roadside every evening and while feasting on mangoes,we would talk about what we wanted to be in future.

At that time, I thought saying:“I want to be a lawyer,” would automatically
make you one later in life. We were all innocent.We did not know what reality awaited
us as adult Ugandans, in the 21st century.Today, thank God, I am in University
studying and hoping to realize my childhood dream of becoming a lawyer next year. But
every time I go back to my home district and talk to my childhood friends, they are far
from realizing their dreams. Why is that? While my parents struggled to raise money
and send me to good schools then like Busoga College Mwiri, on the other hand
my friends’ humble parents did the same but only to take them to the “best” Universal
Primary Education (UPE) schools. With shining shoes, books on shoulders, pens and
pencils resting strategically on their ears; while wearing khaki uniforms, they majestically
marched off to their schools. Ready to embark on an educational adventure in the
social jungles of Uganda and break barriers within society, to become Uganda’s number
one pilots, engineers or doctors later in life,my friends would be welcomed by absent
teachers, small dilapidating classrooms, outdated textbooks; with a curricular that
was not innovative and administrative staff riddled with corruption.
As a result, many pupils began droppingout of school, as they were not seeing any