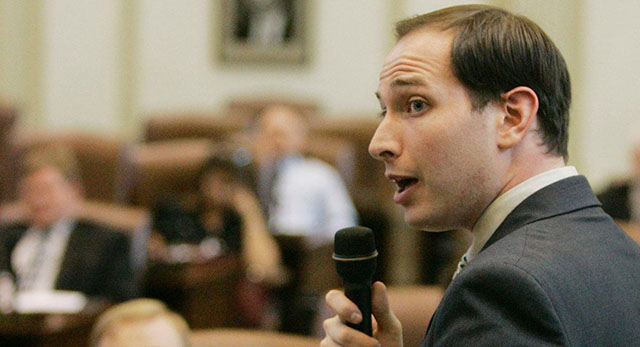 A number of messages to lawmakers purporting to be from average constituents who oppose the Obama administration’s net neutrality rules don’t appear to have come from people within their districts, according to the company that manages the technology for some House members.

The notes have identical wording to those organized by a group called American Commitment, which is led by Phil Kerpen, a former top aide at the Koch brothers-backed Americans for Prosperity.

On Monday, American Commitment boasted that it helped direct more than 1.6 million messages earlier this month from more than half a million voters to members of the House and Senate. Some of the messages encouraged lawmakers to defund the FCC’s new rules requiring Internet providers to treat all Web traffic equally.

The flood of traffic seemed to raise some lawmakers’ eyebrows, including Democratic Rep. Jackie Speier of California, whose office soon determined some of the messages had come from constituents who didn’t recall sending them. Her aides pointed to a memo sent to members’ staff last week by Lockheed Martin, which manages the technology behind some lawmakers’ “contact me” Web pages. Lockheed initially said it had “some concerns regarding the messages,” including the fact that “a vast majority of the emails do not appear to have a valid in-district address.” In some cases, Lockheed also questioned the “legitimacy of the email address contact associated with the incoming message[s].

“The idea that an outside group could use consumer data to impersonate constituents suggests an attempt to hijack the important feedback members of Congress need to truly represent their districts,” Speier said in a statement, without naming a culprit.

Asked about the matter, Kerpen told POLITICO that American Commitment hadn’t impersonated members’ constituents. But he said that other groups had mounted similar campaigns, and borrowed the pre-written text available on his website.

“We’re aware that other groups used identical language in their campaigns and we cannot speak to those efforts,” Kerpen said. “We verified our data through postal address verification and follow up phone calls. We stand by our campaign and Congress should work to stop President [Barack] Obama’s plan to regulate the Internet at the request of these constituents.”

FCC Chairman Tom Wheeler’s net neutrality rules long have been fodder for messaging wars. About 4 million comments flooded the agency in its nearly yearlong review — and many arrived amid alarmist rhetoric on both sides about regulation and the future of the Web.

American Commitment was a key player in that tussle, claiming responsibility for more than half of all comments criticizing the FCC in the final months of the debate. The group soon drew the attention of the Sunlight Foundation, which in December detailed its ties to a series of outside organizations, some of which are affiliated with conservative billionaires Charles and David Koch.

Kerpen on Monday again declined to detail his fundraising sources.

Many of the critical statements from American Commitment’s past email petitions began arriving in lawmakers’ inboxes en masse earlier this month. To solicit support, the group used display ads that asked visitors to sound off against the FCC’s net neutrality rules. Those messages were then delivered March 5-10 in the House and March 8-15 in the Senate, according to Kerpen.

All of those messages — mostly pre-written by American Commitment — slammed the FCC for treating the Internet like a public utility. Some of the emails called on Congress to “pass language in an upcoming must-pass vehicle that blocks any move by the FCC” to continue down its path. Another derided net neutrality supporters as “extremists.” A third criticized Obama for having “publicly instructed the FCC, which is supposed to be an independent agency, to reduce the Internet to a government-controlled utility.”

Speier’s office noted the similar emails and then calculated that about 98 percent of the messages had come from constituents that her office had never heard from before. The congresswoman’s team set about trying to reply to some senders, and a few of the constituents replied that they had never signed up to send emails criticizing net neutrality.

Lockheed also flagged the notes, saying in its memo that the “source of these messages … is not clearly/currently identified.” In later updates to lawmakers, the company said it still hadn’t identified the source, but had set up a filter to capture the messages.

“This is identity theft, but instead of impersonating for financial gain, the originators of this theft are striking at the heart of our representative democracy,

“This is identity theft, but instead of impersonating for financial gain, the originators of this theft are striking at the heart of our representative democracy,” Speier said.

Kerpen acknowledged there could have been some “data or delivery issues” with emails he helped corral, before suggesting that other groups might be behind the missteps. He didn’t identify the other players that borrowed his organization’s language. Yet Kerpen still criticized those who seek “excuses to disregard” the opposition to net neutrality.

Some groups have previously criticized American Commitment for trying to buy lists of names and contact information to bolster its campaigns. At an earlier point in the debate, the consumer group Free Press — which supports the strongest net neutrality rules — was contacted by a conservative email list broker “thinking mistakenly we opposed net neutrality and wanted to be part of the initiative,” said Tim Karr, the group’s senior director of strategy.

“I asked what kind of customers [they have] … and did they work with American Commitment?” Karr explained. “They said yes, we have in the past, but we’re not working with them now.”

Kerpen said American Commitment “did not do any email list rentals” during this current campaign, but “did during the comment period,” as the FCC weighed net neutrality rules.