Minister and MPs clash over the Anti-pornography Act.

Home Minister and MPs clash over the Anti-pornography Act. 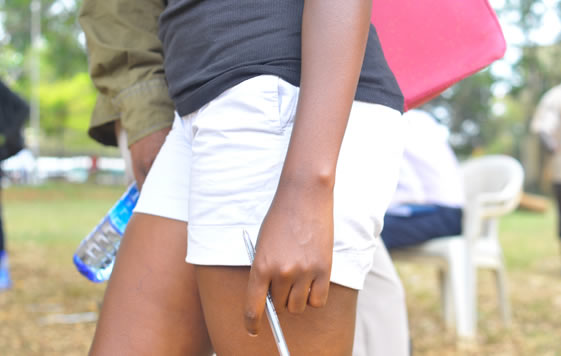 The Anti-pornography Act causes controversy between legislature and the executive as the public takes the law in their hands.

Interpretation of the Anti pornography law has become a center of conflict between women law makers and the minster of Ethics and integrity Rev. Fr. Simon Lokodo. Although women legislators participated in endorsing this act, they are accusing the minister of fuelling public outrage towards women dressed in miniskirts.

According to the chairperson of the Uganda women Parliamentary Association Betty Amongi, minister Lokodo is continuing to misinform the public by portraying the legislation as mainly meant to outlaw min-skirts.

“Assaulting women is a criminal act punishable by the penal code”-Amongi.

Amongi said that it is unfortunate that Minister Lokodo is still quoting the partial definitions of the Anti-pornography law interpreted as exhibition of thighs, buttocks and breasts yet this provision was deleted from the piece of legislation during the law enactment process.

The incidents occurred even before the issuance of the necessary guidelines for implementing the act commonly referred to as the Mini-skirt law.

These unfortunate incidents of human rights violation and abuse have attracted the attention of the police to crack a wipe. Police is charged with the responsibility of maintaining law and order, protecting all Ugandans and their property.

The inspector general of police Kale Kayihura has warned the public to desist from taking law in their hands.

“Uganda is not a lawlessness state, relevant government institutions are available and open for all Ugandans, we therefore condone recent acts indiscipline in which hooligans stripped naked a lady. Police will bring all culprits to book.” The police chief warned.

Women activists are also not taking women stripping on Kampala streets lightly. Activists dressed in miniskirts and shorts staged a demonstration at the National Theater. The ladies carried placards with messages calling for a review of the newly passed anti pornography act.

The negative reception given to the act has however left some legislators rethinking their actions.   First is the vice chairperson of the Uganda Women Parliamentary Association Rose Nyakikongoro who admitted that the law was rushed by parliament.

The Sheema District Woman MP is now suggesting that the recently enacted law should be subjected to amendments and conduct wider sensitization.

Shortly after amendment proposals, cabinet has resolved to recall the law to have a closer look at it and ensure that it is so clear and specific.

According to the Prime Minister Amama Mbabazi reconsideration of the law will help in doing away with different interpretations by different people including enforcement agencies.