Is Uganda ready for E-learning?

Home Is Uganda ready for E-learning? 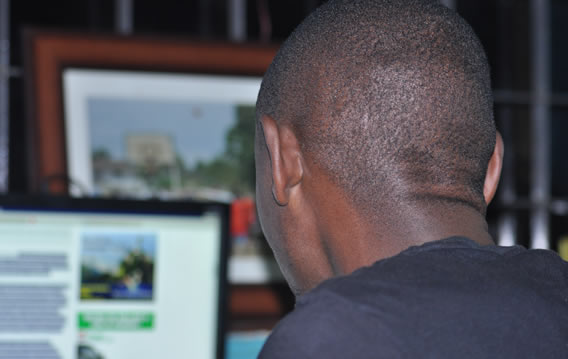 As the government announced its preparations for the E-learning conference slated for the 28th -30th May 2014, this model of learning is a welcome move although there many challenges hampering internet usage.

The coming of this 9th E-learning African Conference to Kampala will have to remind the authorities here that the United Nations resolved that Internet access is a basic human right that should be guaranteed and protected by states.

According to the UN, the right to Internet access, also known as the right to broadband, is the view that all people must be able to access the Internet in order to exercise and enjoy their rights to Freedom of expression and opinion and other fundamental human rights.

Now as Government appreciates and embraces e-learning, probably deliberate efforts will be put in place to ensure observance of this fundamental right and also implement e-learning.

Upholding this right of access to internet would give many Ugandans an opportunity to maximize the benefits of the E-learning system. So the authorities have to expeditiously resolve the problems surrounding internet access and usage in the county.

In an interview with the Unwanted Witness Uganda shortly after the announcement of the forthcoming conference, the Minister for Information Communication and Technology John Nasasira admitted that currently there problems that would hinder e-learning especially in the rural areas.

These hindrances include the slow internet speed, cases of cybercrime, lack of skilled teachers, and inadequate infrastructure especially in the rural areas among others problems. Such challenges are common in the remote and rural schools, for instance situations of crowded classrooms, lack of teaching/ laboratory materials and content further limits the enjoyment of e-learning arrangement.

However the minister assured the public that Government has already taken steps to arrest the situation.

Nasasira told the Unwanted-Witness-Uganda that Government is working on putting in place a reliable infrastructure.

The minister also noted that soon government will be rolling out broad band infrastructure especially mobile broadband for rural areas, saying that when we have this infrastructure in place then the next thing will be to avail devices (the computers).

He adds that the third thing is to ensure there is relevant content and lastly have the teachers with the skills, so government is working closely with the ministry of education on content.

According to government, preparation of the infrastructure is the most important input, which it has already been embarked on. For example government has rolled out installation of computer labs in over 90% of secondary school, some tertiary institution and even universities.

Another important issue is connectivity; the minister says that when the computers are availed in schools, they must be connected.

In cases where there is internet access and actually e-learning is possible, there still other limitations such as invasion of online privacy, cybercrime among others that undermine the enjoyment of this right.

When asked about the rampant cases of cyber crime and invasion of people’s online privacy, the minister noted that government is to harmonize the computer misuse act and other legal issues to ensure protection of on-line privacy. The minister is optimistic that government would be in position to arrest the cybercrime among other on-line ills.

Meanwhile the ministry of education has embarked on having super teachers who are skilled in ICT to train other teachers across the country that will facilitate the e-learning system.

So the ministry of Education is now enrolling super teachers, every holiday super teachers are trained on how they can train other teachers. Nasasira revealed that this holiday 600 teachers are being trained. He stressed that government and other players have to combine all the four, the infrastructure, content, Devices and teachers in order to have an enabling environment for e-learning.

This 9th Conference is expected to bring about other benefits that include exposure of our country to more than a thousand delegates. Their subsequent spending while here will also have an economic benefit to the country. There will be knowledge sharing on ICTs and also collaboration for new investments in the sector.