Internet protest to ‘fight back’ against surveillance

Home Internet protest to ‘fight back’ against surveillance 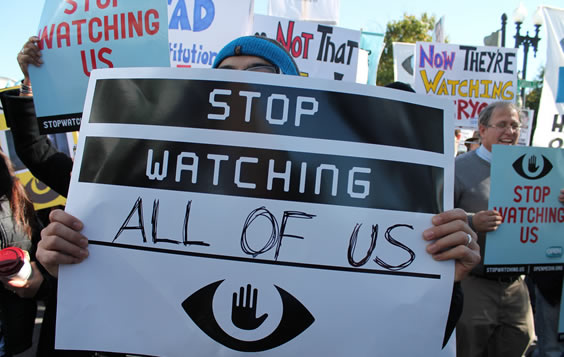 Activist groups, companies, and websites will encourage internet users to take a stand against government surveillance on Tuesday in a protest called “The Day We Fight Back.”

On Feb. 11, 5,700-plus websites plan to post a banner on their pages encouraging users to use their social media accounts to protest surveillance by the National Security Administration and to phone or email their representatives in Congress about reforming internet surveillance. The protest is organized by the some of the same groups that orchestrated the movement against the Stop Online Piracy Act (SOPA) and the Protect Intellectual Property Act (PIPA) in 2012. In response, “Congress, overwhelmed by the popular opposition, quickly backpedaled, leaving the legislation to die,” ‘The New York Times’ wrote in July, 2012.

Demand Progress executive director David Segal said they are not expecting a response similar to the magnitude of the SOPA and PIPA backlashes. However, he told PBS NewsHour they expect “something quite sizeable.” The statement announcing the event speculated that “potentially millions of Internet users” would participate in the protest.

The websites will urge internet users to contact their lawmakers and voice their support for the USA FREEDOM Act and encourage Congress to reject the FISA Improvements Act.

The USA FREEDOM Act would implement a number of surveillance reforms, including the creation of the Office of the Special Advocate to participate in the Foreign Intelligence Surveillance Court, or the FISA Court.

The bill is currently in committee in both chambers of Congress. Segal said the “goal is to start driving that forward” and that he is confident the legislation has enough votes to move out of the House Judiciary Committee and to pass the House floor.

Rep. James Sensenbrenner, R.-Wisc, one of the bill’s co-sponsors, also said it has broad support in the House. “If brought to the floor, I believe it will pass,” he said in a statement to the NewsHour. He also said he would “support any responsible efforts that give it momentum.”

However, the bill faces a more difficult battle in the Senate and gathering the needed support will require “more wrangling and pressure on individual members,” according to Segal. To help create that pressure, when internet users enter their information to contact their lawmakers as part of “The Day We Fight Back,” they will first be connected to both of their Senators.

Sen. Patrick Leahy, who also chairs the Senate Judiciary Committee, has held a number of hearings examining government surveillance and scheduled another hearing for this week. The effort to reform government surveillance is “very much uphill,” said Leahy’s spokesman David Carle, adding “It’s a very serious subject and detailed piece of legislation.”

A number of organizations have endorsed the bill, including Apple, Facebook and Google. The latter was a major participant in the SOPA and PIPA protests, but is not listed as a participant in “The Day We Fight Back.” However, Segal said Tuesday “you will see the involvement of some organizations that are not yet listed.”

“The ultimate goal is to end surveillance programs in general,” Segal said. It is unclear whether “The Day We Fight Back” will produce enough pressure on Congress to push the legislation forward.

When asked about surveillance’s role in ensuring the nation’s security, Segal noted that some members of the Senate Intelligence Committee have said they have not seen any evidence that NSA surveillance was instrumental in protecting Americans. He said their opposition was significant given the “institutional disincentives” to criticizing the programs. “I’m inclined to trust them,” Segal said, referring to the Intelligence Committee members, “More so than I am inclined to trust the heads of these agencies that have operated in secret.”

The day of protest is also in honor of activist and internet prodigy Aaron Swartz, who committed suicide last year. Swartz helped organize the SOPA and PIPA protests in 2012 and faced charges for distributing academic articles that were limited to database subscribers. He was a co-founder of Demand Progress with Segal.

In a statement announcing the event one year after Swartz’s suicide, Segal said, “If Aaron were alive he’d be on the front lines, fighting back against these practices that undermine our ability to engage with each other as genuinely free human beings.”