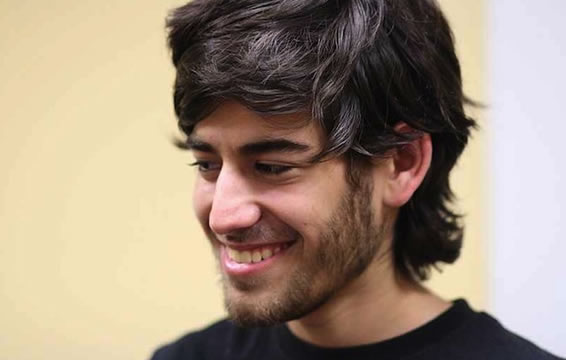 On January 11, 2013, federal prosecutors, in an aggressive campaign to bring high-profile convictions against hackers, finally broke the spirit of talented internet activist and technologist Aaron Swartz. Faced with 35 years in prison and thousands of dollars in fines, not to mention a long battle with depression, Swartz committed suicide. And with that, one of the great voices of internet activism fell silent.

Swartz, co-founder of Demand Progress, and developer of the RSS feed, Creative Commons, and Infogami (the site that would merge with Reddit), had willingly fought the government over the JSTOR database theft. When Swartz placed a laptop in an MIT wiring room and began downloading 4.8 million academic papers, it was the distillation and practical application of his “Guerrilla Open Access Manifesto,” where those with technical skill had a duty to make humanity’s educational birthright open to the world. With his suicide, the government crusade to make an example out of Swartz backfired, turning a young internet legend into a virtual martyr.

This past Friday, a coalition of activist groups, tech companies, and websites announced a “worldwide day of activism” aimed at the NSA’s mass surveillance efforts. Taking place on February 11th, “The Day We Fight Back” is being organized by Demand Progress, the Electronic Frontier Foundation, Fight for the Future, Reddit, Mozilla, BoingBoing, and other groups. The action is being held in honor of Swartz’s life, but also in celebration of the successful protest against the Stop Online Piracy Act (SOPA) that he helped inspire two years ago.

On the day of action, a coalition of activists will make calls and drive emails to lawmakers, protesting the NSA’s mass surveillance programs. In a move similar to the SOPA blackout, owners of websites will install banners encouraging visitors to take up or continue the fight. Tech company employees are expected to demand the same from their organizations. The coalition is also asking that internet denizens across the globe get creative and develop memes, as well as change their social media avatars to reflect the anti-surveillance sentiment. Over 1,000 wbsites signed up to take part in the first 24 hours.

“Today the greatest threat to a free Internet, and broader free society, is the National Security Agency’s mass spying regime,” said David Segal, executive director of Demand Progress in an official statement. “If Aaron were alive he’d be on the front lines, fighting back against these practices that undermine our ability to engage with each other as genuinely free human beings.”

“I think that all digital protests—about online rights—are now compared to the SOPA effort. [It] set a standard to live up to which might literally never be beaten.”

Fight for the Future’s Holmes Wilson sees “The Day We Fight Back” as a means of lighting a fire under the USA Freedom Act, a bill that would limit NSA surveillance. “We’ve got to start somewhere and sponsors won’t introduce the bill until they know they’ve got the votes to pass, so we’ve got a light a fire under this,” said Wilson. “More broadly, there are so many different ways to fight back against the NSA, so a huge part of this is just getting people to start with all the information they’ve taken in over the past few months from the Snowden leaks, come up with something, and try something.”

In many ways, the SOPA blackout made the NSA protest movement possible. It was the moment that public consciousness rose against the monetized and heavily regulated internet. The campaign’s success inspired many digital protests of the last several years (ACTA comes most immediately to mind). More recently, Swartz’s legacy can be found embedded in last year’s broad and aggressive NSA protest movement.

Pre-SOPA, digital protests didn’t have quite the same character or tenor. Coming at the end of a year dominated by Anonymous hacks and DDoS campaigns, it was the yin to the Anonymous yang of internet activism and direct action. As Swartz’s Demand Progress co-founder David Segal said, the SOPA effort has become the benchmark of all digital protests. “I think that all digital protests—about online rights—are now compared to the SOPA effort,” Segal said. “That set a standard to live up to which might literally never be beaten, and led to the development of new alliances and tactics which are very much in play here. Aaron was at the core of much of that.”

But, unlike so many in protest movements, Swartz wasn’t interested in heirarchy. For him, individual creativity was the main ingredient in digital protest. “Part of what made the SOPA protests so amazing, transcendent almost, is that, as Aaron once put it, ‘everybody made themselves the hero of their own story,'” added Segal. “We want everybody to feel like, and to actually be, a leader of this movement.”

It was this unique gift of communication that not only inspired the people close to Swartz, but those who admired him from afar. Developer and internet activist Sina Khanifar is one of the latter. “Aaron committed suicide just as I was beginning to get into activism,” said Khanifar. “While I’d been reading his essays for some time before then, it was only after he passed that I began to fly in his circles. Almost everyone I work with now was either close friends with Aaron or previously worked with him, so his shadow looms large over everything we do.”

The Day We Fight Back banner preview

Khanifar found inspiration in Swartz’s “total, heartfelt dedication” to challenging those areas of society that are malfunctioning. For Swartz, that could be open access to scholarly papers or giving people a more resonant democratic voice with various internet tools. The goals were many, as were the angles of attack. “If you look back at his writing from when he was a teenager, you find that even then he was rallying his fellow students against an education system that he thought wasn’t working,” Khanifar noted. From open access to copright and surveillance, Swartz’s influence was considerable, and he had much to say about the NSA, anecdotes of which are scattered across essays and short stories.

“The way Aaron hacked together tools like DeadDrop has been a big inspiration for me, and the reason I set up Taskforce.is,” added Khanifar. “In particular, we’re trying to complete what he started with Victorykit, an activist toolset that would allow anyone to win a campaign.” Taskforce.is will be putting out a call widget for this campaign, which anyone can add to their site to generate calls to congress. It’s the type of tool that Swartz would have delighted in making.

“He was a close friend to me and Tiffiniy Cheng over the years,” said Holmes. “We’d hang out with him from time to time in San Francisco, Boston, or DC. In many ways, our initial plan for Fight for the Future was modeled on Aaron’s work on ‘Bold Progressives’, and during the SOPA fight he dove in and fixed our website at a few critical moments. The tool we used to drive emails to Congress on American Censorship Day and during the SOPA blackout was built by Aaron.”

“Aaron is the reason I read Watchmen, I think,” Holmes reminisced. “Both Tiffiniy and I sort of randomly started reading Infinite Jest last month, independently of each other—mostly because we were thinking about Aaron. It was one of his favorite books.”

“Nobody really jumps out as filling Aaron’s role. He carved out a spot in the world that is difficult for anyone to step into.”

A year on, Segal said that Swartz might not have understood how much he meant to people like Khanifar and Holmes, which makes his suicide all the more tragic. In that way, the melancholy of his suicide echoes that of Infinite Jest author David Foster Wallace, who also didn’t fully grasp how much people loved him. “Untold thousands across the globe care so much about what he did with his life, and see it as a path to follow,” said Segal, who has been inundated with emails over the last 48 hours. “I’ve only been able to check but a minority of them; but even so, I’ve seen people announce memorials for him from as far away as India. And I think he’s had a particular effect on other technologists, helping more of them look at the world, and their work, through a politicized lens.”

Mostly, though, Segal is just sad that Swartz isn’t around to be part of the fight against NSA surveillance. Some of their very last conversations centered on the surveillance state, and how they could raise awareness about the programs Edward Snowden would later reveal, and build a movement around it. Before Snowden, Segal and Swartz knew— “in broad strokes”—what was going on with the NSA, in part because of “admonitions by Senators Russ Feingold, Ron Wyden, and Mark Udall, in addition to the work of the ACLU and EFF.”

Segal believes that Swartz would have been in the middle of NSA protest movement, helping to rein in mass surveillance, and making significant contributions to the effort. His technical skill alone is sorely missed in ducking state and corporate data mining. Though it’s pointless to think of what might have been, Swartz’s voice, his ideas, could have been even more imporant to the surveillance reform than his technological acumen.

“If you take a step back from Aaron’s running of code and creation of tools for internet activism, you will see an infrastructure of ideas,” said EFF’s Parker Higgins. “Aaron laid a lot of that groundwork.” In appraising Swartz’s legacy, it’s difficult to say which was the most vital talent. Rare is the occasion when such qualities exist in a single person. It takes technical brilliance and a force of personality. Julian Assange, despite his flaws, is cut from a similar cloth, as were many of the cypherpunks that traded in their crypto-libertarianism for a more Promothean relationship between technology and democracy. One where the cypherpunks didn’t just help themselves, but worked for people and internet users of lesser technological talent.

“Nobody really jumps out as filling Aaron’s role,” said Higgins. “He carved out a spot in the world that is difficult for anyone to step into. But, I do think that there are people who are technically-inclined who realize how important that role is in the world.” With more and more people becoming the heroes of their own internet activist story, perhaps the many instead of just one can fill the void.