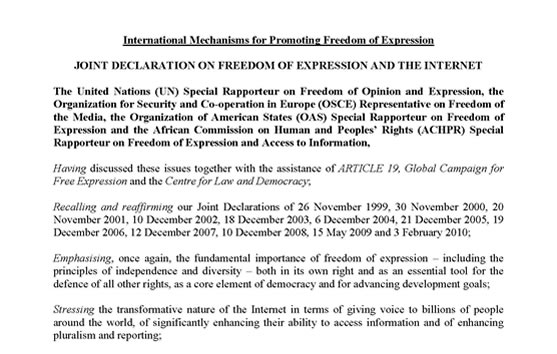 JOINT DECLARATION ON FREEDOM OF EXPRESSION AND THE INTERNET

Emphasising, once again, the fundamental importance of freedom of expression – including the principles of independence and diversity – both in its own right and as an essential tool for the defence of all other rights, as a core element of democracy and for advancing development goals;

Stressing the transformative nature of the Internet in terms of giving voice to billions of people around the world, of significantly enhancing their ability to access information and of enhancing pluralism and reporting;

Cognisant of the power of the Internet to promote the realisation of other rights and public participation, as well as to facilitate access to goods and services;

Welcoming the dramatic growth in access to the Internet in almost all countries and regions of the world, while noting that billions still lack access or have second class forms of access;

Noting that some governments have taken action or put in place measures with the specific intention of unduly restricting freedom of expression on the Internet, contrary to international law;

Recognising that the exercise of freedom of expression may be subject to limited restrictions which are prescribed by law and are necessary, for example for the prevention of crime and the protection of the fundamental rights of others, including children, but stressing that any such restrictions must be balanced and comply with international law on the right to freedom of expression;

Concerned that, even when done in good faith, many of the efforts by governments to respond to the need noted above fail to take into account the special characteristics of the Internet, with the result that they unduly restrict freedom of expression;
Noting the mechanisms of the multi-stakeholder approach of the UN Internet Governance Forum;

Aware of the vast range of actors who act as intermediaries for the Internet – providing services such as access and interconnection to the Internet, transmission, processing and routing of Internet traffic, hosting and providing access to material posted by others, searching, referencing or finding materials on the Internet, enabling financial transactions and facilitating social networking – and of attempts by some States to deputise responsibility for harmful or illegal content to these actors;