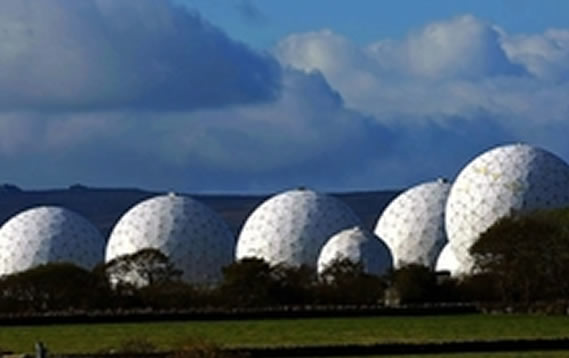 Privacy International is proud to announce our new project, Eyes Wide Open, which aims to pry open the Five Eyes arrangement and bring it under the rule of law. Read our Special Report “Eyes Wide Open” and learn more about the project below.

For almost 70 years, a secret post-war alliance of five English-speaking countries has been building a global surveillance infrastructure to “master the internet” and spy on the worlds communications. This arrangement binds together the US, UK, Canada, Australia, and New Zealand to create what’s collectively known as the Five Eyes.

While the existence of the agreement has been kept secret from the public and parliaments, dogged investigative reporting from Duncan Campbell, Nicky Hager, and James Bamford have been trying to uncover the extent of the arrangement for years. Now, thanks to Edward Snowden, the public are able to understand more of the spying that is being done in our name than ever before.

Now, it is time to unmask this five-eyed monster. The invasive and indiscriminate surveillance that is being conducted in secret, and justified on the basis of secret bi-lateral agreements and inaccessible legal frameworks, must come to an end.

That’s why today Privacy International is launching an international campaign to pry open the Five Eyes arrangement and bring their secretive spying alliance under the rule of law. Called “Eyes Wide Open,” the campaign has four main goals:

Already, we have challenged UK government spying in the IPT, filed OECD complaints against undersea cable companies, and sparked European data protection authorities to investigate the NSA’s hacking of the SWIFT network. And today, we wrote to the governments of the Five Eyes States demanding the publication of the treaties and agreements that underpin the alliance.

Many other organisations are taking action too. Big Brother Watch, Open Rights Group, English PEN, and internet campaigner Constanze Kurtz are challenging the UK government’s surveillance of our data at the European Court of Human Rights. The Stop Watching Us coalition in the United States has been lobbying the US governments and holding mass protests in the name of ending mass surveillance.

Today, Privacy International is joining EFF, Access, Open Rights Group, and Open Media to launch a Campaign to End Mass Surveillance, enlisting citizens from around the world to urgently call on their governments to put down this mysterious arrangement.

Out of the shadows

While these arrangements have been in existence for decades, the alliance is now coming out of the shadows to block UN resolutions condemning the mass surveillance that has been revealed over the summer.

Intelligence agencies and the governments that operate them have been revealed to be not merely secretive, but hypocritical, and dismissive of any legitimate public concerns. It is time to bring these practices, and the covert agreements that underpin them, into the light. For more than sixty years, the secret patchwork of spying arrangements and intelligence-sharing agreements that makes up the Five Eyes alliance has remained obfuscated by the States whom it benefits. Save for one critically important release of declassified documents in 2010, the Five Eyes States have spent almost 70 years concealing from their citizens the scope and extent of their global surveillance ambitions – eroding the public’s ability to communicate privately and securely without examination or question.

Despite the fact that the Five Eyes comprises democratic governments, the rules which govern the arrangement – rules which have allowed the infiltration of every aspect of the modern global communications systems – are entirely hidden from the public. Providing for a complex division of roles, responsibilities and lines of authority, and the establishment of jointly-run operations centres, the Five Eyes arrangement creates a signals intelligence architecture vaster than NATO. And while its actions implicate the private communications of every connected individual across the globe, the arrangement was executed and operates clandestinely, hidden from the scrutiny of public oversight mechanisms and – until recently – the public.

The Five Eyes – in conjunction with others – have infiltrated every aspect of modern communications systems. We know that their capabilities include directly accessing internet companies’ data, tapping international fibre optic cables, sabotaging encryption standards and standards bodies, hacking the routers, switches and firewalls that connect the internet together, and obtaining information from almost any source in the world they are able to get access to.
Yet, because the agreement is shrouded in secrecy, we do not have access to the covert agreements and treaties that govern up the alliance. We have no ability to challenge their implementation and their impact upon our human rights. We cannot hold our governments accountable when their actions are obfuscated through secret deals.

We do not live in the same world today as when the Five Eyes arrangement was founded. Our communications are not confined by borders, our interests not defined by our nationality. Yet in seeking to justify their global surveillance practices the Five Eyes alliance relies on outdated legal frameworks that arbitrarily purport to distinguish between nationals and foreigners, as if the internet required a passport to move through its corridors.

These legal frameworks – which attempt to provide one standard of privacy of communications for citizens of Five Eyes states, and another for the rest of the world’s population – violate the internationally recognized right to privacy. An individual does not need to reside within a country’s borders for that State to violate their privacy rights when intelligence services intercept their emails, phone calls, and text messages.

We know now that Five Eyes governments can remotely spy into communications and computers across borders with impunity. What these governments do not seem to understand is this: human rights obligations apply to all individuals under a State’s jurisdiction, regardless of their physical location.

The Five Eyes must be held to a new legal framework that respects the rights of all individuals, not just the citizens that live within a respective government’s borders. Without acting swiftly, the five-eyed monster will continue to grow in ambition, size, and scale, swallowing up everything in its path until we have no privacy left.