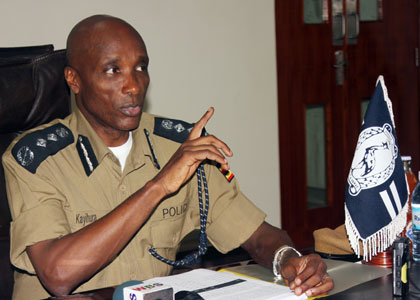 Kampala. Inspector General of Police Kale Kayihura has established a cybercrime unit and appointed its head, days after President Museveni warned about misuse of cyberspace to incite hatred and tribalism.
Gen Kayihura appointed assistant superintendent of police Richard Ndaboine as head of the unit to work with the Forensic Referral Centre of Excellence to execute his work.
Police spokesman Fred Enanga said the trends have changed and many people are committing crimes on the internet and they need to ensure they are stopped.

“There are many cybercrimes cases that people are reporting to us. Some people have lost millions of shillings while others are related to threats that could destabilise the country. We needed to act fast,” Mr Enanga said.
President Museveni has twice warned users of social media platforms to stop inciting hatred and tribalism.
His warnings followed an audio exchange on WhatsApp social media platform between people suspected to be of two ethnic communities from western Uganda each calling the other names.

Another case was about a letter purported to have been written by President Museveni to former Libya leader, Col Muammar Gaddafi in which sectarianism was highlighted. President Museveni said the letter is a forgery and ordered police to investigate.
The president also alleged that his former premier Amama Mbabazi’s name had been mentioned in the authorship of the said social media sectarian attacks.
Since President Museveni’s statements, police have been cracking down on people they suspect to be issuing offensive communication on social media.