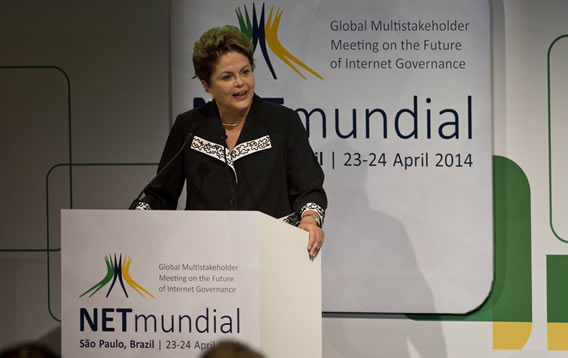 Brazilian President Dilma Rouseff signed into law a kind of Internet bill of rights on Wednesday.

, the law enshrines access to the Web, guarantees neutrality and “puts limits on the metadata that can be collected from Internet users in Brazil. It also makes Internet service providers not liable for content published by their users and requires them to comply with court orders to remove offensive material.”

Rouseff signed the law just before she delivered remarks at the NETmundial gathering, which is focusing on the future governance of the Internet.

“Brazil has cast itself as a defender of Internet freedom following revelations last year that Rousseff was the object of surveillance by the United States’ National Security Agency. She cancelled a state visit to the U.S. last October over the revelations, which came out of leaks by former NSA analyst Edward Snowden and showed Brazil’s state-run Petrobras was also the object of American spying.

“Rousseff had championed a measure requiring Internet companies to store the data of Brazilian users inside the country, as a way of protecting citizens from further U.S. spying, but clause was cut from the final bill amid fears it would prove too challenging to implement.

“Rousseff signed the bill into law early Wednesday ahead of her opening remarks at the NETmundial conference in Sao Paulo. Representatives from dozens of countries were in attendance, as were top Internet figures including a Google vice president and the head of the U.S.-based organization that coordinates the Internet naming system.”

If you remember, the United States announced it was relinquishing back in March.

It asked the Internet Corporation for Assigned Names and Numbers to gather the stake holders and “craft an appropriate transition plan.”

That transition is expected to happen within 18 months. This conference is a first step.

that the bill signed by Rouseff — called Marco Civil — “will be a model for the conference, not just for its content, but also for the way in which it was composed.”

“The bill’s authors received contributions from hundreds of individuals and organizations since it was first proposed in 2009.

“‘Brazil will try to show off the Marco Civil effort and say, “This is what we did internally, it actually works, and we would like it to be considered globally,”‘ said Ronaldo Lemos, director of the Center for Technology and Society at the Fundacao Getulio Vargas School of Law in Rio de Janeiro.”