Yikes: NSA can turn on your iPhone’s camera, mic without you knowing 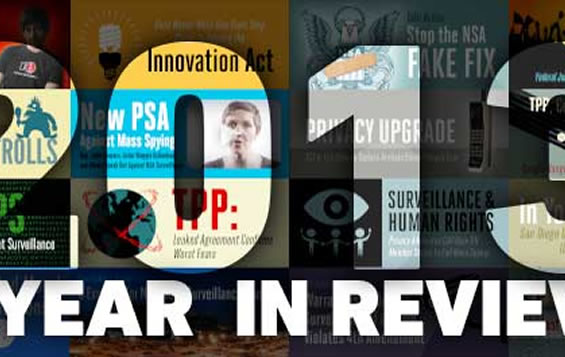 As the year draws to a close, EFF is looking back at the major trends influencing digital rights in 2013 and discussing where we are in the fight for free expression, innovation, fair use, and privacy. Click here to read other blog posts in this series.

Our favorite online free speech law, Section 230 of the Communications Decency Act (CDA 230), is under attack. The law ensures that online intermediaries are not liable for their users’ actions, meaning that online speech platforms remain robust and widely available. While this law’s importance is obvious—it allows for the very existence of everything from review sites to Wikipedia—a small but vocal number of law enforcement officials and policymakers, in the name of combating illegal and undesirable behavior, continue to push for sweeping legislative changes to state and federal law that would threaten to upend this bedrock protection.

This year was especially challenging on the legislative front. At the federal level, 47 state attorneys general asked Congress to amend CDA 230 by adding a carve-out for state criminal laws. Currently, there’s an exemption for federal laws; a site must take action, for example, if a user posts child pornography or violates federal intellectual property laws. But in an attempt to crack down on legitimate concerns like child sex trafficking, the state AGs went too far with their proposal. They claim that in order to fix this problem, all state criminal law must be exempted as well, a proposal that would necessarily subject service providers across the country to a cumbersome and contradictory patchwork of 50 states’ criminal laws—many of which are awful or absurd. Such a “fix”—that would effectively shift regulatory control of the Internet to 50 state governments—would unduly burden online services and threaten the very free speech CDA 230 was supposed to protect.

Specific state-level proposals, many that simply ignore CDA 230 altogether, have been similarly misguided. For example, after EFF last year successfully challenged a Washington State statute aimed at combating online child prostitution by improperly targeting speech platforms themselves (in conflict with CDA 230), New Jersey this year passed a virtually identical law… one that was itself successfully blocked by EFF. Similar proposals, however, continue to be entertained in legislatures around the country.

2013 also saw a number of serious efforts in the courts to chip away at the scope of CDA 230’s protections—the most important one a high-profile case involving Sarah Jones, a teacher and cheerleader for the Cincinnati Bengals, and a gossip site called The Dirty. When a federal district court ruled that the operator of The Dirty was liable for defamatory content by its users—something CDA 230 was created to protect against—a broad range of companies, organizations, and individuals groups rallied to the site’s aid, focusing not on the nature of the gossip site but on the wisdom of CDA 230’s broad protections. Practically every major online service provider signed onto an amicus brief seeking the overturning of the district courts rulings, recognizing the dangerous precedent this case was setting. EFF, the ACLU, and other free speech advocates filed a similar brief of their own, underscoring the need to recognize and uphold strong intermediary protections in every case.

Challenges to strong intermediary protection look to continue into 2014. While advocates are right to highlight online abuses and shortcomings in protections for potential victims, efforts to chip away at the critical speech protections like CDA 230 are misguided and will continue to be actively opposed by EFF.

This article is part of our 2013 Year in Review series; read other articles about the fight for digital rights in 2013.