Home About the Project

“Land is the source of our livelihood; it helps to produce food to feed families, provides a place of cultural and social belonging with symbolic and spiritual values that communities consistently reinforce and provides a place of residence, a registered address to allow peo- ple to vote in elections and an inheritance for future generations” the Unwanted Witness – Uganda

Land in Uganda employees the majority of the working age population through agriculture and fishing hence playing an important part in the country‟s economy, with 80% of all jobs (Uganda Vision 2040, 2013). While some cash crops are grown for export (particularly cof- fee, tea, cotton and tobacco), many rural communities have traditionally relied on subsis- tence agriculture, growing cassava, corn, potatoes and millet, as well as plants for medicinal uses (U.S Department of State, 2012).

Land being an important factor of production and basis of livelihoods in many parts of the world especially Uganda is currently under threat from local and foreign large-scale acquisi- tions code named as “land grabbing”. Uganda has witnessed increasing cases of large scale land acquisition in the recent past but the nature and character of these land deals is still fraught with a lot of controversy.

The rush for land in the world has been going on since colonial times but the rush and scale and the nature of land acquisition since 2008, is most worrying. The phenomenon of land acquisition in the world became more tense with the 2007-2008 global food and energy crisis, in which world commodity prices rose precipitously, sparking fears among many net food importing countries about the security of food and energy supplies. In 2009, the International Food Policy Research Institute (IFPRI) estimated that deals of 15 – 20 million ha of farmland in developing countries were under negotiation between 2006 and 2009 (Cotula et al 2009). This might have been an under representation (Hall, 2011). The World Bank’s report on “Large Scale Land Acquisitions‟ of 2010 suggests that the scale is bigger, 56 million ha were announced before the end of 2009 and more than 70% of it was in Africa (Deininger et al. 2011, xiv). The Land Matrix report (Anseeuw et al. 2012), estimates the land deals at 83.2 million hectares in developing countries.

It has to be mentioned that while land acquisition has gained prominence and been widely popularized by media reports and other researches such as GRAIN, the international land deals and their impacts on the local populations remain under represented. This under representation is largely due to limited data on the scale, who is involved and the nature of land deals taking place especially in rural Africa.

It‟s against this background that the Unwanted Witness with support from Open Society for Eastern Africa (OSIEA) www.osiea.org is implementing a pilot project “our land, our Live” which intended to put communities in-charge of fighting land grabbing through community radios, community writers, online platforms and strategic partnerships between Unwanted Witness; traditional medias and National Non Government Organisations (NGOs) to amplify voices of land grabbing victims and change their lives. 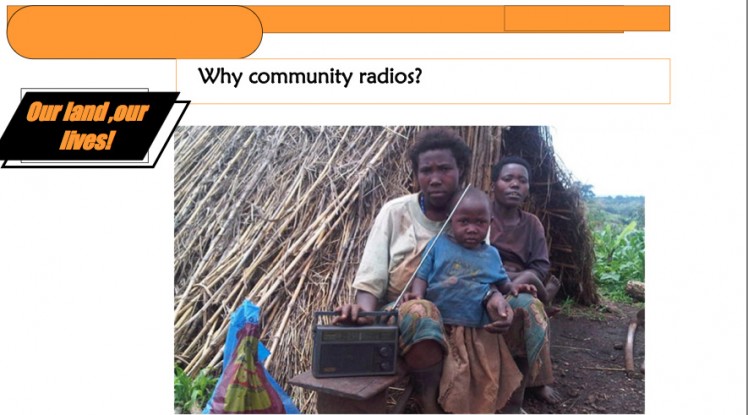 The Unwanted Witness considers community radio as an intervention strategy of choice for deepening community participation and hence, community ownership as a tool for social change. Also, beyond empowering communities, community radios can catalyze behavior change and impact positively on wider development outcomes.

Under this project, the Unwanted Witness is building capacity of programme producers and radio presenters of three community radios based in Hoima, Mubende, Kayunga, Kampala districts and later in Northern Uganda on how to produce informative, balanced and human rights based programmes. At the end of it, we would like to see community contributing 75% of the total content aired and community members given a voice and share discussion platforms (radio studios) with their political, civic and religious leaders and law enforcement officers particularly to share their concerns discuss them and forge an informed way forward. 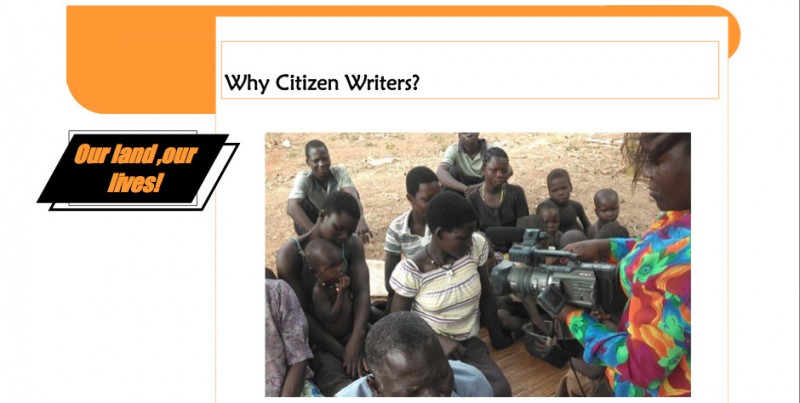 The Unwanted Witness is giving ability to „ordinary citizens in effected villages/communities affected by land grabbing‟ to develop and publish their own content. We‟re using technological developments through the Human Rights Based Approach (HRBA) to increase the availability of user-friendly content capture devices, such as personal mobile phone alongside the absorption into popular consciousness of free distribution sites such as YouTube, websites and Facebook. We would like to see an increase in reporting cases of land grabbing in their communities which stories will also be broadcasted on area community radios and published on the Unwanted Witness website www.unwantedwitness.or.ug as well as other platforms.