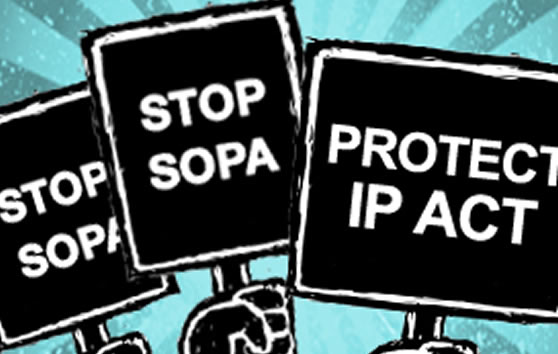 Today marks the one-year anniversary of the Internet blackout in protest of SOPA and PIPA, and in celebration, Internet activists have dubbed it “Internet Freedom Day.”

Activists have set up a website to honor freedom of expression, encouraging Internet users to share their celebratory message, and take action today.

“Here’s a list of things you can do right now to continue the fight for an open, accessible, and awesome Internet,” the site said, above suggestions like banding together in memory of Aaron Swartz, signing the Declaration of Internet Freedom, and even engaging in what the activists called “a small act of civil disobedience.”

One such act included uploading a video of Dr. Martin Luther King Jr.’s historic “I Have a Dream” speech. As noted by Mashable, the speech is owned by EMI, which has issued takedown notices whenever it makes its way online. “Hardly anyone wants to live in a world where something as inspirational and educational as Dr. King’s speech can’t be shared. And, Internet Freedom Day is about that,” said Tiffiniy Cheng, co-director of Fight for the Future, which posted the video.

“Because this speech is copyrighted, if SOPA had passed, entire websites could have been shut down just for linking to it,” organizers said.

The Stop Online Piracy Act and the PROTECT IP Act (PIPA) were intended to target “rogue” overseas websites. But opponents worried that the bills were too broad, and might result in a crackdown on legitimate, U.S.-based sites. On Jan. 18, 2012, thousands of websites, including Wikipedia and Reddit, participated in an Internet blackout aimed at raising awareness. In the wake of that blackout, SOPA and PIPA were shelved.

“The defeat of SOPA and PIPA was a watershed moment in our political history,” the Center for Democracy and Technology said in a statement today. “Internet Freedom Day provides an opportunity not only to look back in commemoration, but also to raise awareness and remind lawmakers that the Internet-using public continues to pay close attention and take action to defend the Internet and free speech.”

Non-profit technology think tank TechFreedom shared similar thoughts, saying that for this movement to mature, the concept of “Internet freedom” needs to “become more than a slogan that anyone can rally behind.”

For now, TechFreedom is focused on a push for Congress to protect Fourth Amendment rights, as well as amend anti-hacking statutes, turning violations of a site’s terms of service from federal crimes into lesser infractions. Rep. Zoe Lofgren of California has floated a draft version of a bill that would do just that.

Internet censorship reaches beyond the U.S., though, as Computer & Communications Industry Association CEO Ed Black pointed out. He mentioned citizens in Iran and Syria who have faced Internet shutdowns, and China’s continued effort to control online use.

“While there is an overwhelming realization on Capitol Hill, thanks to the SOPA defeat, that measures that tinker with how the Internet works can have collateral damage, we expect those pushing for extreme copyright enforcement measures will try again,” Black said.

For more, see PCMag’s Top 5 Objections to SOPA, PIPA and the slideshow above. Also, check out TechDirt’s infographic below detailing the history of Internet Freedom Day.