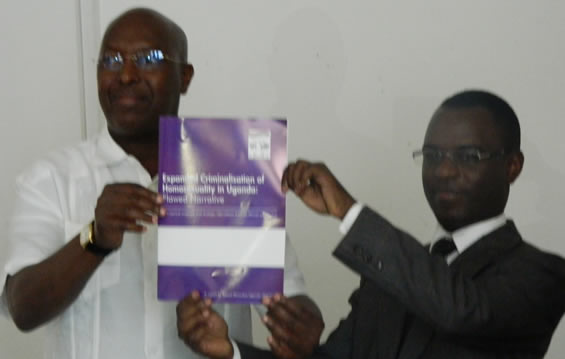 The sexual minorities in Uganda (SMUG) have not relented in their effort to stop a legal process that intends to curtail their inherit rights based on their sexual orientation.

In their bid to save their necks which are at stake after the passage of a stringent Anti-homosexuality bill 2009 which is awaiting the controversial signature of President Museveni for it to be enforceable, Sexual Minorities under their body [SMUG] have issued a report which demystifies their rights.

Last year, the Parliament of Uganda, passed an harsh piece of legislation with a view of defining what homosexuality means, the offenses and their penalties on conviction, by a competent court, but the law has attracted severe criticism from both local Ugandans, human rights organizations and International community particularly the donors.

Though he is given a maximum period of assenting to act of Parliament, the President has since then declined to play his constitutional mandate on justifications that he needs more time to study the act further to get wider knowledge about the homosexual community not limited but to ascertain whether people are produced already gays or they just adopt the vice on earth.

As the country is awaiting the scientific study the President ordered doctors top undertake, the gay community have taken efforts to carry out a research with a view of stepping up their argument against the recent controversial law by Parliament.

This report is entitled the “Expanded criminalization of Homosexuality in Uganda: A flawed Narrative” , stresses that the current enacted law has serious consequences as regards to the violation of human rights as well as negative impact on public health.

The minority group argues that the act contravenes Chapter 4 Article 21 of the Ugandan constitution which provides for equality for all and freedom from discrimination as the programs director f Sexual minorities Uganda Julian Pepe Onzima says, adding that they will send the same copy to President Museveni who is the only Savior they are left with.

Pepe, also adds that there was no need of a new law since the country had the already existing laws.

He, thus says that like any other normal sex some undisciplined people commit misdeeds there are some members of the gay community who go astray, proposing that the perpetrators should be the ones to be brought to book, before facing the law.

“Rape is rape, sexual violence is sexual violence, be it committed by a hetro sexual or a homosexual that should be criminalized, it doesn’t matter who is doing it” said Pepe.

“And we already have sexual offences Act that should be inclusive of same sex violence we do not need an extra legislation to do that” he added.

He was flanked by Geoffrey Ogwaro, the coordinator of the Civil Society Coalition on Human Rights and Constitutional Law, who said that the critics of the anti-gay act based their arguments on mainly seven myths.

Quoting different examples of African kings and societies, the activist stressed that the practice is therefore not imported from the western world as argued by some people.

“According to the study the same-sex practices were common in pre-colonial Africa as demonstrated by a wealth of anthropological and historical data”-Ogwaro.

He further urges that the study has disproved all these myths as they are not based on facts and evidence.

On Homosexuality being a mental disorder, Ogwaro reported that Homosexuality practices have been removed from the lists of forms of disorders by the World Health Organization and American Psychiatric Association.

On child abuse, Ogwaro says that it is not true that expanded criminalization of homosexuality will reduce cases of child abuses yet majority of the cases are committed by the heterosexuals.

It is at this stage, that an active gay Pepe weighed in to say that there is “no empirical evidence to back the recruitment of children as cited by the proponents of the anti gay law”, standing his ground that the “The law will address none of these issues either because there is no issue to address because it simply targets the wrong people”

He, vehemently rejected an argument that gay community is “recruiting young children” into the gay practice as it is being portrayed by their crucifiers.

“First of all up to now since the tabling of the bill we have been waiting for evidence and even the definition of recruitment in this bill does not make sense”.

Their report thus recommends for the amendments of the sexual laws such that offences cater for gender natural to ensure that all perpetrators face justice, before courts of law, implementation of the a system of mandatory reporting of suspected child abuse.

On his part, Hassan Shire Sheikh, the Coordinator of the East and Horn of Africa Human Rights Defenders Project, said the report is such a significant documentation since it will go a long way in educating the policy makers and the general public to de-toxic ate themselves of the wrong assumptions which have been fed in them.

He adds that the report will help the people to understand that the LGBT community is part of the society in Uganda.

Turning to African governments, the Human Rights Defender from the horn of Africa said that any right thinking legislative/executive leaders should be focusing more on touching issues which affect the ordinary Ugandans and Africans as a whole Poverty, governance malpractices, corruption, war conflicts which afflict the people on the continent than legislating on human rights matters.

“So to me the bill that is discriminatory should never have been a priority for Uganda because two consenting adults in their own free will, in their privacy shouldn’t have been a business of parliament or government or anyone” Hassan said in his conclusion.