France wants to fight terrorism by spying on everyone

Home France wants to fight terrorism by spying on everyone

French lawmakers have spent the past four days debating a controversial anti-terrorism bill that, if passed, would dramatically expand the government’s surveillance powers. The law’s backers describe it as a necessary measure to thwart terrorist attacks, and it has strong support on both sides of the aisle. But the bill has drawn sharp criticism from French internet companies over fears that it could harm business, and from privacy advocates who say it would severely curtail civil liberties.

The proposed law, introduced in Parliament on Monday, would allow the government to monitor emails and phone calls of suspected terrorists and their contacts, without seeking authorization from a judge. Telecommunications and internet companies would be forced to automatically filter vast amounts of metadata to flag suspicious patterns, and would have to make that data freely available to intelligence services. Agents would also be able to plant cameras and bugs in the homes of suspected terrorists, as well as keyloggers to track their online behavior.

“THIS IS NOT A FRENCH PATRIOT ACT.”

This week’s debate comes more than three months after gunmen killed 17 people in a string of attacks that began at the Paris office of the satirical magazine Charlie Hebdo. Following the attacks, Prime Minister Manuel Valls called for stronger surveillance of social media websites and digital communications, raising fears that the government would respond with its own version of the Patriot Act — the sweeping anti-terror legislation that the US passed following the September 11th terrorist attacks. Valls sought to quell those concerns when he announced the bill last month, telling reporters that surveillance operations would only be carried out on suspected terrorists, and that controls would be put in place to prevent abuse.

“This is by no means an implementation of exceptional measures, nor the widespread surveillance of citizens,” he said. “The bill makes clear that this enhanced monitoring will only concern terrorist communications, it demonstrates that there will be no mass surveillance… this is not a French Patriot Act.” In a speech to Parliament on Monday, he added that the bill “has nothing to do with the practices revealed by Edward Snowden,” referring to the widespread surveillance conducted by the US National Security Agency.

But critics say the law gives disproportionate power to the office of the prime minister, and that the proposed controls don’t go far enough. The bill calls for the creation of a nine-person commission to conduct oversight of surveillance operations, but it is only authorized to advise the prime minister’s office, not override it. Civil rights groups also say the bill’s language is dangerously broad in defining legitimate targets, potentially implicating civilians as well as suspected terrorists.

“Suddenly, you’re in a system where the government has full power, full control over intelligence services,” says Eva Blum-Dumontet, an advocacy officer at the London-based watchdog Privacy International. “If we learn anything from history it’s that giving full power to governments on surveilling citizens is really not a good idea.” 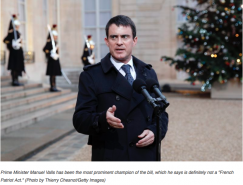 Privacy International, Amnesty International, and other human rights organizations expressed alarm over the bill when it was announced last month, urging Parliament to give it careful scrutiny. It’s also been criticized by the National Digital Council, which advises France’s government on technological issues, and by several French web hosting companies, which say the threat of constant government intrusion would undermine their business.

Of particular concern is the provision requiring telecoms to automatically filter internet traffic. Under the law, internet service providers would have to install monitoring mechanisms — referred to by the French media as “black boxes” — that would use algorithms to detect, in real time, suspicious behaviors in internet metadata. The bill’s supporters stress that this metadata would remain anonymous and that content of communications would not be automatically swept up, but the behaviors that would constitute a “terrorist-like” pattern are still unclear. Critics say the measure effectively amounts to mass surveillance of web traffic on a disproportionately large scale. Under the bill, recordings could be stored for up to one month, and metadata for up to five years.

France’s current data protection laws date back to 1978, and are among the strongest in Europe. “It’s a comprehensive data protection framework that applies to both the public sector and all industries,” Fabrice Naftalski, a data privacy attorney and partner at the legal firm EY in Paris, says of current French law. “Protection of personal data is a fundamental right.”

“THEY DON’T SEEM TO ACTUALLY WANT TO DEBATE.”

But the country’s counter-terrorism laws haven’t been revised since 1991, which was the original impetus behind drafting this bill last summer. The legislation took on a new sense of urgency following January’s attacks, when Valls moved to fast-track it for passage by this summer. (A vote is expected early next month.)

An alarmingly high number of French nationals have traveled to fight in Syria and Iraq, according to interior ministry figures, and the government has sought to combat jihadist propaganda on social media. Three weeks after the Charlie Hebdo attacks, the government released a highly stylized website to deter young people from joining radical movements. Last month, Interior Minister Bernard Cazeneuve traveled to the US to urge companies like Facebook and Google to play a more active role in turning over user information to French authorities.

Blum-Dumontet welcomes stronger regulation of France’s intelligence services, noting that the measures it aims to codify are things that “are already happening in the dark.” But she fears that Valls’ bill may be rushed through while the wounds of Charlie Hebdoare still fresh, and without the kind of careful deliberation it deserves.

“They don’t seem to actually want to debate and have a roundtable about what the secret services should be entitled to do,” Blum-Dumontet says. “And I think that’s a really problematic attitude.”